Despite having my name in the title of the blog this will officially be my first written post. Emily has thus far been the mastermind, but I figured it was about time I gave this a try. So bear with me as I’m not accustomed to writing anything other than interoffice emails. So with that disclaimer out of the way, here we go:

Last weekend Emily had a work trip planned to Windsor Ontario, and much like her last trip to Kingston, I decided to tag along. Though she had been there before, this was my first trip to Windsor and I didn’t quite know what to expect. Since it’s directly across the border from Detroit I figured that there would be some staunch Canadiana trying to represent for all those crossing from the states. And while there are your typical kitschy souvenir stores here and there, what stood out more to me were the billion night clubs and abundance of small cigar shops on the main drag of Ouellette Ave. This makes perfect sense when you think about it, drinking age in Detroit = 21, drinking age in Windsor = 19. So what you get is a bunch of 19-20 year old club hoppers crossing the border for a night of debauchery. The cigar shops are likely due to the friendly Canadian/Cuban relationship and resulting ease of purchasing nice Cuban cigars. So despite the fact that we aren’t the club going type, the people watching was entertaining for sure.

After Emily had finished her work on the Saturday we took the tunnel across to Detroit to check it out. We parked downtown, had a big lunch, then wandered around a couple of the old buildings and the waterfront area. There were an uncanny amount of wedding parties patrolling the same area taking their photos, I’m sure we accidentally photo-bombed a number of shots. It was a nice afternoon, and though we didn’t get an in depth look, we enjoyed a quick jaunt in Detroit. It wasn’t until our way out that we saw a little of the decaying side of a once booming city. Due to my ineptitude in guiding us to the bridge back to Canada, we ended up circling quite a few streets lined exclusively with large factories and warehouses completely boarded up and decrepit. We ended up passing the old train station that looked to be once an amazing structure but is now a modern ruin.

All in all it was a nice weekend and interesting to see the unique relationship between Canadian and American bordering cities, and it was definitely strange crossing from the US to Canada by traveling south! 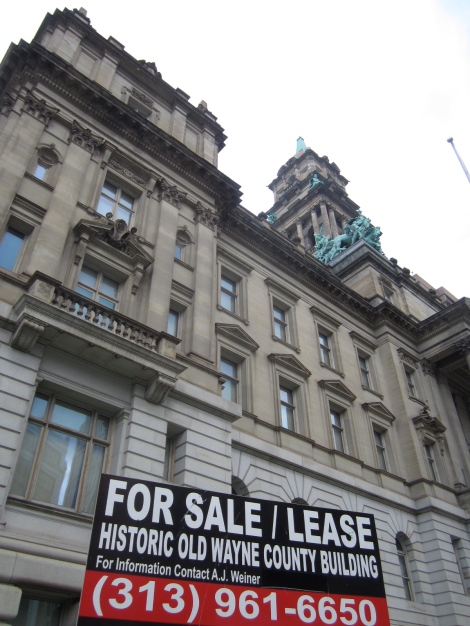 2 responses to “A Weekend in Windsor”

Who are you and Ewan?

We're Emily and Ewan, a couple from Toronto that get up to lots of different things in the pursuit of never-ending happiness. This blog details what we are up to!